Delmar DivINe carries a tradition of caring with coworking

Learn how this once abandoned eyesore become a bustling hub of community, business, outreach, innovation and more.

The very definition of a coworking space has evolved. It’s expanded to include all varieties of organizations and configurations, but one ingredient remains a constant across all these iterations: a cultivated community.

With that in mind, lets travel to a community in St. Louis, Missouri, which was formerly known as the Delmar Divide.

The first part of the name was created by two early landowners, from Delaware and Maryland respectively, combining the names of their home states. But the second has a darker connotation: it was a visible and visceral division between two racial and socio-economic sides of the city. A concise history can be found here.

In the heart of that community is a massive structure that began as a hospital and became a heath care facility. But then it was abandoned, and became a hulking shell of an eyesore dominating a skyline and an entire city block.

From building bears to building community

Maxine Clark is the powerhouse founder of Build-A-Bear Workshop. And just as she shaped an entire (adorable) brand from a vision, Clark saw this 500,000 square foot derelict property and had a vision for something transformative for the community. She brought the vision to life, rechristening it the Delmar DivINe. She tells the story here.

Today, Delmar DivINe represents a vast breadth of use and experiences happening across its refurbished, updated, and welcoming campus, including:

Clark herself is often seen guiding tours of the space, introducing tenants to guests and funders, and staying in touch with the various organizations calling the space home. And the community at large serves in an advisory capacity, ensuring that the services and organizations coming into the property are aligned with their needs and accessible by their residents.

Even as coworking spaces differ and vary in their configurations, membership base, and missions, they continue to overlap in a commitment to their communities. And that means creating and delivering opportunities that are both planned and unplanned.

For such planned events, Delmar DivINe hosts lunch and learns, workshops, networking nights, and open houses. For the more unplanned, ad hoc opportunities, the space itself is designed to enhance what Clark calls “catalytic collaborations,” when one member organization happens to run into another… and inspiration is ignited. 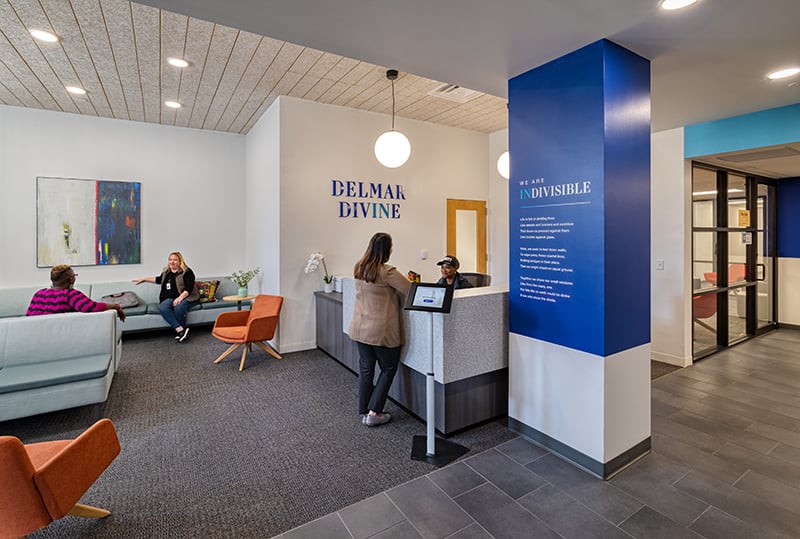 Allie Cicotte is Director of Programs at Clark-Fox Family Foundation and described these everyday, exciting examples.

“We have a Collaboration Cafe on the main floor, where people can come down from their own space to eat lunch or get something from the Grab and Go. And we have an interior courtyard where people might go out and have lunch or a meeting.”

Right now, the tenant organizations participate in biweekly presentations — deep dives into their own missions and programs, which helps forge connections and identify partnerships. But often the high value interactions are completely improvised.

“One of our tenants is an organization that mentors young women of color, while another is a charter school that has their nurses and social workers in our building. One day, the head nurse walked into the mentorship program’s office for an introduction.

By the end of it, the two organizations were partnering to distribute washable menstrual pads, which solved a huge issue for all their constituents,” she said.

“Another day found one of our health-focused organizations putting out a campus-wide announcement for flu shots, available by walk-in. What a great way to protect our community! These kinds of opportunities happen every day.”

July of 2022 saw record-breaking floods in St. Louis and across Missouri. And a certain day at Delmar DivINe started like most do, with Cicotte and the team seeing new residents and tenants into their spaces.

“We had tenants moving in, and we were putting the finishing touches in some common spaces. I had literally just pressed publish on the website page about our new coworking space.”

Within moments, Cicotte was alerted to water in the building. Not just some dampness. This was a flood.

“We were trying to figure out what to do. We felt a bit panicked, but we were really lucky in a lot of ways: we still had construction workers on site, who quickly sprang into action to help. A large portion of our main floor was quickly filling with water. In St. Louis, the sewer and rainwater systems are combined and we realized we were going to need to evacuate the building. But there was only one safe exit point.”

Thankfully, Cicotte and her team had the clarity of mind to use the Coworks dashboard and send out a push notification through the mobile app about the evacuation plan and safety risk.

"We don’t have a general intercom system, but Coworks lets us send out an urgent alert to members on their phones. We immediately saw people heading toward the correct exit. It was really a blessing to have a tool like Coworks that let us quickly communicate with over 300 people.”

And in the days following, Cicotte was able to easily contact everyone who booked rooms and offices, alerting them to the status change, taking rooms offline and back online as they were repaired — all through the Coworks dashboard.

Delmar DivINe truly defines a multi-use organization: from hospitality to residential, from commercial to non-profit, all these facets are helping to reshape life in this St. Louis neighborhood and have a home on the massive campus. 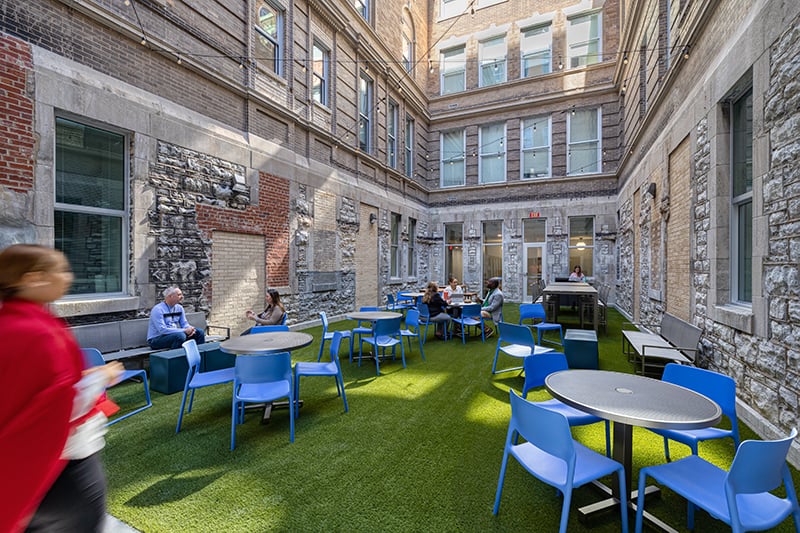 “I'm really excited because, by the end of Q1 in 2023, we will have all of our nonprofit tenants moved into all of our suites. We are 100% leased on the nonprofit side, and we also have our retail spaces opening on the campus,” Cicotte explained.

“We are in the first few months of operating our coworking space, which is called the Node. It’s a unique opportunity for people to interact with the other work that's happening at Delmar DivINe. Maybe you're a solopreneur who has a passion for the social service sector, or you're a small nonprofit and a staff of one and you don't need a full office space, but you want to still be connected.”

Node coworking space members have access to the events that are hosted in the building. They're a part of the Coworks member directory alongside hundreds of employees of the larger businesses.

“Our address is 5501 Delmar, so we're selling 55 six-month, unlimited coworking memberships for $550. It’s a great deal! And then we'll have monthly unlimited memberships and day passes. We offer reduced rates for our residents in apartments and for folks that live in the 63112 ZIP code. It’s truly exciting to see the energy that ignites this space!”

Maxine Clark is known for saying that the property has always been a place of caring, from the day it opened in 1904 through all its manifestations over the century. The entire Delmar DivINe team is excited to see what kind of impact it can have going forward.

Small businesses in Jacksonville, Florida now have a dedicated space to work without having to commit to permanent office space.

5 ways to gain revenue from your coworking space

Coworking spaces, like other businesses operating on margins, usually start operations “in the red.” It then becomes vital for the health and...

Reopening your coworking space? How to encourage people to come back

Over the past year, many businesses had to close down for the sake of public safety. Now, things are beginning to open up again. While that is a...