How SheSpace cultivates a culture of support

Stephanie and Katie Tsuru designed a women-centric space in Houston, Texas to address a need they felt: a welcoming space to network and get work done.

How it started… and how it’s going

Like millions of working women around the world, Stephanie Tsuru found herself running from meetings to appointments to pickups and other tasks all over Houston, Texas, with the inevitable downtime when it made no sense to return home, but was too early for the next obligation. For Tsuru, it was the worst thing in the world: inefficient.

“Where do you go in between?” she wondered. “Well, you look for a coffee shop. But it’s always loud. Or you work in your car. And that was my pain point. I thought, this is a waste of my time — time I don’t have to waste. There has got to be a better way to do this.”

So she did the natural thing: she approached her daughter-in-law, Katie.

Katie was having a similarly frustrating experience in her own day to day life. As a new mom, she felt isolated and unsupported in the male-dominated oil and gas industry. Like so many other women, she felt she had to work as if she wasn’t a parent and parent as if she didn’t work. As she prepared to welcome her second child, Katie was ready for a change.

Then her mother-in-law approached her with a vision: a women-centric coworking space in Houston.

“Stephanie came with an idea of creating a solution to the problem that I was facing: an environment where working women will feel supported.”

Katie and Stephanie found their skills complemented each other and their vision was unified. SheSpace was born. The Tsuru team broke ground during the summer of 2019 — at the pinnacle of the COVID-19 lockdown in Houston. But rather than an obstacle, the crisis inspired the founders to reshape the space to serve emerging needs around health and safety. That meant more closed offices and the opportunity for dedicated desks.

And the story wasn’t hard to tell. In fact, they had members signing agreements before the drywall was even up.

Stephanie and Katie were mindful to apply their mission to every step of the business, which included partnering with women-owned vendors and providers as they grew the space.

“We have a team of 33 women that built SheSpace,” Stephanie explained. “We started by looking for a female construction manager. Then everyone we hired from architects to external signage, they’re all women.”

“We support small, local, female-owned businesses,” agreed Katie. “And that meant it took longer in some cases, because these women are few and far between. But it mattered to the mission.”

Today, SheSpace members reflect a wide variety of industries and experience, from age 25 to 75. And the hours reflect the way in which many women need to work: in the evenings and on weekends.

Creating a selling feature no one can touch, but everyone can feel 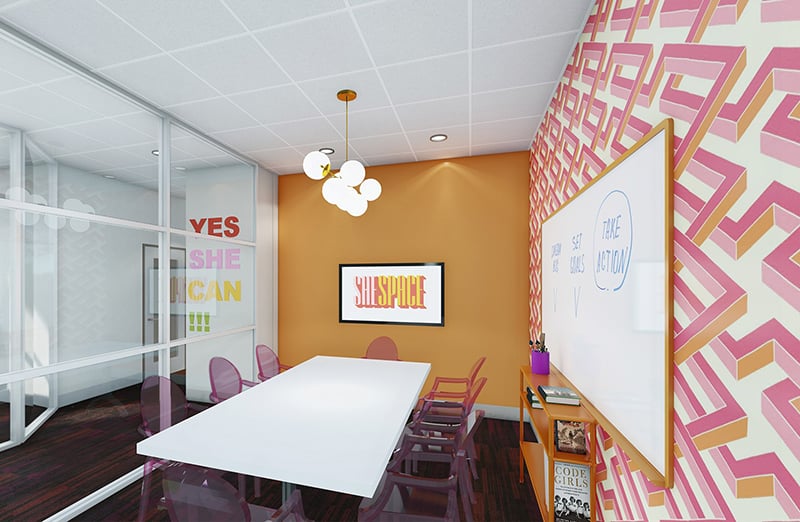 The supportive environment at SheSpace isn’t accidental. It’s the result of events that are curated to enhance the value of the community and a careful cultivation of membership.

“We take prospective members around to see the space, and we spend nearly an hour with every person that comes in here. We’re also interviewing them to ensure a good fit,” said Stephanie.

Stephanie herself often welcomes members from the front desk, ensuring she’s in touch with each person and up to speed on their projects and goals. That’s how connections get made and community gets built.

In fact, the community is nearly as powerful a draw as the office space. So much so that SheConnects was launched for women that wanted the networking and access that came with membership, but didn’t need an actual desk. SheConnects offers weekly events, with speakers and workshops around professional development, skill leveling, and more.

“We didn’t see this coming,” said Katie. “We knew women needed a physical space to work and  pursue their dreams, but we soon realized they also wanted to be part of something bigger.”

Speaking of bigger, SheSpace is about to increase its footprint to meet the growing demand of its members, expanding into the space next door.

“Our success is their success,” Katie and Stephanie said, nodding together. “We grow because our members are growing and winning. And if we can shine our spotlight on these women who are doing amazing things, that’s what we’re going to do.”

A nexus is a connection or series of connections linking two or more things. Which is why it’s the perfect name for Nexus Co-Work & Event Space.

Small businesses in Jacksonville, Florida now have a dedicated space to work without having to commit to permanent office space.

More than just sound dampeners in coworking spaces, various interior fixtures are a chance to lean into the design aesthetic of your flex space.